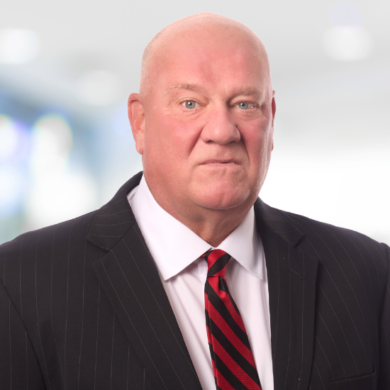 Jack Simons has been with Hoagland Longo since 1988, and has proven himself to be a high caliber Partner within the firm.  Jack is admitted to the Supreme Court of the United States and the United States District Court, District of New Jersey.  He is also certified by the Supreme Court of New Jersey as a Civil Trial Attorney.  His practice is devoted exclusively to representing defendants in civil litigation and insurance coverage disputes.  He has taken hundreds of cases to verdict and has tried numerous cases to conclusion in the Superior Court of New Jersey.

Jack is an AV-rated attorney by Martindale Hubbell. He has been consistently recognized in The Best Lawyers in America since 2012 and in New Jersey Super Lawyers since 2005.  In addition, Jack was awarded the Hon. Herman L. Breitkopf Trial Lawyer of the Year by the Middlesex County Trial Lawyers Association in 2013.

Jack represented a snow removal company in a slip and fall case that was tried to verdict in Union County before Judge Ciarrocca.  Plaintiff’s demand prior to trial was $5 million and the jury found no fault on either of the defendants.

Jack established that the snow removal company applied salt and calcium chloride at the appropriate times they were contracted for (3-4 occasions during the on-going ice storm), and that they took reasonable steps to clear the sidewalk of snow and ice.  In addition, Jack introduced evidence that discredited the Plaintiff’s claims of permanent injuries as a result of the fall.

On Tuesday, May 3, 2016, the jury found that neither the snow removal company nor the co-defendant bank were negligent and returned with a verdict of no cause of action.

Jack Simons represented Defendant in an Essex County trial against Plaintiff who claimed an automobile accident caused severe orthopedic injuries to her neck and back, as well as a traumatic brain injury.  The jury unanimously found that Defendant was not negligent in connection with the accident and awarded Plaintiff no damages.

Jack prevailed at Morris County trial in a case involving severe injury. Plaintiff claimed to sustain numerous injuries including injury to the back, neck, face, teeth, elbows, left shoulder and abdomen in an automobile accident.  He also alleged that he sustained severe cognitive injuries including blurred vision, dizziness, hearing loss, tinnitus, and memory loss.  Despite the Plaintiff’s $750,000 demand, the jury awarded only minimal damages of $14,000 to the Plaintiff – a major victory for the Defense.

John C. Simons prevailed in a trial before the Honorable Mark A. Troncone, J.S.C. in Ocean County, New Jersey.  Plaintiff claimed that she had sustained a permanent traumatic brain injury as a result of a motor vehicle accident that occurred on August 5, 2015.  The allegations of traumatic brain injury included a perilymphatic fistula to the ear and visual vestibular integration dysfunction with decompensation.  Plaintiff also claimed that she sustained permanent orthopedic injuries, including cervical and thoracic spinal disc herniations with recommendation for future cervical fusion surgery.  The jury found that Plaintiff failed to prove that she had sustained any permanent injury as a result of the accident, and returned a verdict in favor of the Defendant.

Jack represented an insurance company in an issue regarding whether the roof and resulting interior damage to the Plaintiff’s building was the result of Superstorm Sandy and/or related to pre-existing deterioration which would not be covered pursuant to the policy issued by the insurer to the Plaintiff.

The Complaint alleged that the insurer failed to pay the proceeds of the policy and therefore breached the Contract of Insurance, in addition to a breach of implied covenant of good faith and fair dealing. The Plaintiff was looking to secure compensatory and consequential damages, and other forms of relief and punitive damages in the total amount of $553,000.  The carrier conceded there was damage to the lighting in the exterior of the property and shingles for the total amount of $33,480.

The jury returned in 18 minutes with a determination that the roof did not need to be replaced as a result of damage caused by Superstorm Sandy.  The court ordered that all claims against the carrier alleging “bad faith” be dismissed.

Jack defended his client – a Caterpillar tractor dealership company – in a utility vehicle liability matter in which the driver operating a UTV lost control, resulting in one of the Plaintiffs being ejected from the vehicle.  The Plaintiffs argued that the dealership was negligent for failing to properly maintain the UTV, and that its mechanically deficient brakes and steering caused the Accident.  The pre-trial demand was $3.5 million.

The case was tried before Judge Wolfson in Middlesex County, and Jack argued that the drivers version of events was inconsistent with all other accounts of the accident; that the accident was caused by the excessive speed of the vehicle; and, that the Plaintiff was unable to control the vehicle after going over a speedbump.  In regards to his client, Jack argued that their maintenance efforts were reasonable; that the vehicle was inspected prior to its rental and had been utilized on-site for approximately one month; and, that there were no mechanical deficiencies that would have caused the accident.

The jury returned a verdict finding the Plaintiff ninety (90%) percent at fault for the accident resulting in no cause for action against Jack’s client.

Jack obtained a favorable jury verdict in Ocean County Superior Court against a Plaintiff who claimed a rear-end automobile accident caused severe orthopedic injuries to her neck and back. Jack represented the underinsured motorist carrier who stepped into the shoes of the driver who allegedly hit the car Plaintiff was a passenger in.

Jack successfully argued that the accident was a minor fender-bender, and that the Plaintiff’s injuries were degenerative in nature and not a proximate cause of the accident.

The jury returned a unanimous no-cause verdict in favor of the defendant on January 17, 2019.

The underlying lawsuit arose from an accident where an employee of the U.S. Postal Service was struck while walking in the parking lot at work by a vehicle operated by another postal employee. The decent died while undergoing surgery to her skull. Jack’s client, a general contractor, was responsible for a project where the parking lot was resurfaced and restriped pursuant to design plans approved by USPS officials. The Plaintiff brought the general contractor into the case because the parking lot did not contain directional arrows in the main access aisle and it was alleged that it created confusion for motorists.

Jack ultimately prevailed on a motion for directed verdict at the end of Plaintiff’s case on May 2, 2019. He argued that the absence of the directional arrows was not a proximate cause of the accident. Moreover, that his client as a government contractor, was entitled to the government contactor defense.

Jack obtained a favorable jury verdict at trial in Middlesex County Superior Court on May 22, 2019. The underlying lawsuit was filed against a Defendant auto repair shop and its mechanic, who rear ended Plaintiff’s vehicle while test driving a customer’s vehicle.  As a result of the accident, Plaintiff claimed to have sustained a variety of permanent injuries, undergoing surgical repair of the left shoulder, left elbow and right hip.

Jack presented evidence that the shop owner took reasonable steps when he hired the mechanic involved in the accident.  Plaintiff’s “expert” in the field of auto repair shops was unable to substantiate his opinions with regard to Plaintiff’s claims of negligent hiring, retention, supervision and training.  As a result, the Court instructed the jury to disregard this expert’s testimony and dismissed these claims of negligence against the auto repair shop. Jack argued to the jury that they should focus on the causation and lack of permanency of Plaintiff’s injuries.

Jack prevailed at trial in Middlesex County Superior Court in a unique case where the identity or ownership of a commercial truck that caused a severe accident was at issue. Prior to trial, the court already determined that the truck and its operator were negligent.

The truck that caused the accident was driving with a load over capacity in the container of the truck. The load struck a railroad overpass causing a piece of scrap metal to fall on the Plaintiff’s hood and windshield. The Plaintiff alleged to have suffered severe injuries to his eye, neck, lower back, knees and abdominal wall.

Jack argued that his client, a company in the business of junked cars, could not have been responsible for the accident because the material that fell on the Plaintiff’s car was scrap metal not from a junked car. Further, that all trucks from the company were accounted for by GPS and EZ pass records on the date of the incident and were clearly not on the road where the accident occurred. Jack was also able to undermine the credibility of an eye witness who alleged that he followed the truck involved in the accident, never lost sight of it, and that it was a truck from the company Jack represented.

On October 24, 2019, the jury returned a unanimous verdict that Jack’s client was not responsible for the accident and that another company named in the suit was ultimately the cause.