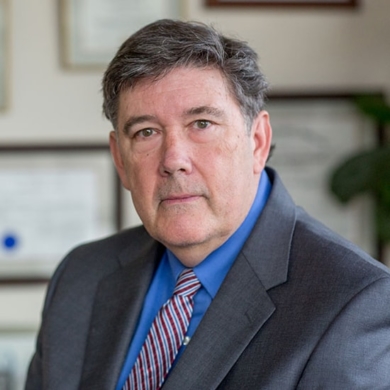 Michael F. Dolan is a partner at Hoagland Longo and has been with the firm since 1986 when he began practicing law. He is an experienced trial attorney having taken over 50 cases to verdict.  Michael handles a wide variety of claims including complex construction claims, construction defect, transportation, product liability and professional liability. His wide breadth of experience gives him unique insights into the representation of his clients. He is also an AV-rated attorney by Martindale-Hubbell Peer Review Rating.

Michael also counsels clients in risk management to help avoid costly and time-consuming litigation. He has been asked to present seminars to insurance professionals both through the Claims and Litigation Management Alliance (CLM) and the CEU Institute as well as by private companies on a wide variety of subjects including risk management, bad faith and premises liability. He has also spoken to various professional groups, including the New Jersey Society of Professional Engineers and the New Jersey Society of Professional Land Surveyors on the areas of risk management and current topics in construction law.

We represented a well-known engineering firm in a $1 million dollar suit brought by a major New Jersey developer alleging the improper design of a subsurface groundwater recharge system in a new mixed-use development which resulted in the flooding of homes. Developer sued seeking removal and replacement of the entire recharge system. The general contractor was not sued by the developer as it was a sister company to the developer. We argued the GC and its subcontractors deviated significantly from our plans and specifications which resulted in the failure of the recharge system and the resulting flooding.  The jury returned a unanimous verdict in favor of our client in 12 minutes.

This was one of the largest construction defect cases in New Jersey in recent history.  Total claimed damages exceeded $100 Million Dollars when the case started its first phase of mediation.  We defended one of the primary masonry subcontractors. The masonry claim alone exceeded $22 million.  After several rounds of motion practice using the Statute of Repose as a defense,   we were able to resolve the matter on a significant discount while motions for reconsideration were pending on the Statute of Repose.

Plaintiff was the driver of a car that rear ended our client’s tractor trailer that was parked on the shoulder of the New Jersey Turnpike.  Our driver had pulled over to the shoulder for a brief nap. Plaintiff suffered a significant brain injury in the accident.  Our defense was that plaintiff lost control of her vehicle and crashed into the rear of the parked tractor trailer.  Plaintiff had little recollection of the accident and relied on the fact that our tractor trailer failed to put out the required reflective devices to warn of his position.  The key to our success was the 911 tape we obtained of the original call to the state police after the accident. The unidentified caller reported that plaintiff had lost control of her vehicle and hydroplaned into the rear of our parked tractor trailer. The 911 call was critical to the successful defense of the case and resulted in a minimal settlement of the original demand of $8 million dollars. We were able to settle the case at an extremely significant discount while the court considered motions in limine to exclude the 911 call.

Michael represented the manufacturer of a commercial tanker used to transport oil for the use of making food products. Plaintiff was a truck driver who was severely injured in the process of descending a ladder on the side of the tank after closing the ports on the top of the tank. Plaintiff alleged improper design and failure to warn. Plaintiff issues providing proof since nobody identified the exact tank she fell from after the accident. He was able to obtain a summary judgment due to plaintiff’s improper description of the ladder configuration which we argued showed she could not have fallen from a Brenner Tank. Our client’s tank had a very special particular ladder configuration not consistent with Plaintiff’s description.

He represented a manufacturer of machine used in industrial packaging in a case where Plaintiff had 3 fingers amputated while operating the machine. Obtained very favorable settlement after proving in discovery that plaintiff had fabricated how the accident occurred, misidentified client’s machine and misused another machine in the plant.

Michael represented the manufacturer of commercial scaffolding in which the plaintiff suffered a severe brain injury when he fell from the scaffolding on a construction site.  Plaintiff alleged improper warnings on the product. There were no witnesses to the accident and plaintiff had a very sparse recollection of how he fell.  With the assistance of the client we selected an expert who was a member of the ANSI committee charged with promulgating the standards for the warnings at issue in the case. Plaintiff’s Human Factors expert paled in comparison and the case settled for a significant discount.