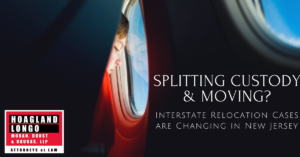 The New Jersey Supreme Court did a very rare thing on Tuesday, August 8, 2017, which will have a significant effect on all interstate relocation cases in New Jersey.  Typically, the State Supreme Court does not stray from its own rulings, relying on the legal principle of stare decisis that a legal issue, once addressed by the highest court in the State, is decided.  In Tuesday’s case of Bisbing v. Bisbing, the New Jersey Supreme Court found adequate reason to stray from the stare decisis principle and reset the standards for interstate relocation cases.

Previously, stemming from the Court’s prior decision in Baures v. Lewis, the standard for an interstate relocation case, where one parent wanted to move with a child from New Jersey to any other state or foreign land without the other parent’s consent, was largely based on who was previously designated the custodial parent and whether there was a good faith reason for the move and whether the move was “inimical to the best interests of the child.”  This somewhat amorphous standard was relatively easy to satisfy in my humble opinion.  If a custodial parent had a good faith reason to relocate from New Jersey to Florida, New Jersey Superior Court judges were frequently going to approve the move over the other parties’ objection provided that there was a sufficient parenting time schedule put in place for the parent remaining in New Jersey.  My experience had been that a sufficient parenting time schedule was typically the lion share of the summer and school breaks with the parenting remaining in New Jersey.  Provided that the moving parent was willing to offer this type of parenting plan and was not moving for a bad faith reason (ie. they were moving for a better job, to be closer to family, returning to their prior State, etc.), the legal process was not that difficult, although it could be time consuming.  When representing a traditional non-custodial parent faced with a relocation petition, counsel’s role was typically to obtain as many parenting time concessions from the moving party as possible, including transportation payment obligations, child support concessions, and as much non-school year parenting time as possible. Counsel’s role was not, based on the difficulty in prevailing in opposition, to simply oppose the move at all costs.

Bisbing resets counsel’s role as it affords the non-custodial parent another opportunity to become the custodial parent if they so desire.  Under Bisbing, the relocation must be analyzed under the best interest standard. In order words, the Court must look anew at a determination of the child’s best interest and determine which parent the child should stay with, the remaining New Jersey parent or the moving parent.  All of the original custody factors must be looked at, raising the bar substantially for the moving parent to prevail on their application.  The Court moved from the Baures factors because, contrary to their thinking at the time of the Baures decision, the legal trend toward easier relocation did not materialize and, the Bisbing Court found, the opposite occurred.

My opinion is that the Bisbing decision represents a victory for non-custodial parents, whose parenting time rights were relegated to an almost inconsequential role in Baures relocation decisions and an appropriate reset of custody analysis, placing the children’s interests front and center as they should be.  It is an unfortunate fact of life that relocation happens, driving families apart. It should not be an unfortunate fact of the law that a non-custodial parent has limited to no ability to stop it and Bisbing attempts to remedy that, which should give potential relocators pause in their plans and make them deal more fairly and openly with their child’s other parent.

If I can be of any assistance in helping you, or someone you know, navigate potential relocation plans, please do not hesitate to email me at bmcfaddendinicola@hoaglandlongo.com or call me at 732-545-4717 to set up an appointment to discuss the specifics of your case.