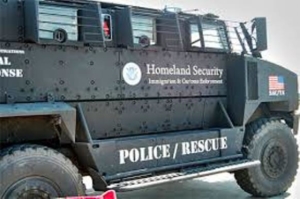 These raids can occur at almost any location and at any time.   The reason for this is that the fourth amendment’s guarantee to be secure in your home from warrantless searches and seizures generally does not apply in deportation hearings.  If an official forcefully enters a person’s home in the middle of the night without a warrant and drags them out, the fourth amendment’s exclusionary rule will usually not provide them protection in a deportation hearing[2].

Officials need to follow certain procedural requirements to deport someone.   One such procedural requirement is that the person needs to be given proper notice of adversarial proceedings.  A person who has been told to leave the country can challenge in absentia (a legal term; is Latin for "in the absence" or "while absent") orders on the basis that they were not given proper notice.

A person may have been told to leave the United States and be completely unaware of it.  People apprehended and released at the border need to provide an address, which is used by immigration officials to send a notice for immigration proceedings.  The notice is sent by regular mail and may not be properly delivered.  If the person does not receive the notice and consequently does not appear for immigration proceedings, they are told to leave the country in absentia.  A person may be waiting to receive a notification and not realize they are a target for the most recent round of immigration raids.

If you or someone you know is a possible target for one of these raids, they need to know that the Constitution will generally not protect them in their home.   They can try to protect themselves by seeking to challenge the orders before they are rounded up.

If you should have any questions regarding immigration issues, please feel free to contact Julio Navarro at jnavarro@hoaglandlongo.com or (732) 545-4717.